"...the earliest time-stamp on Libor manipulation we've seen yet -- is a Financial Times op-ed by former Morgan Stanley trader Douglas Keenan. He claims that Libor, a key short-term bank lending rate that affects mortgages and other interest rates throughout the economy, was being jerked around for fun and profit as long ago as 1991."


Well then, that puts a different spin on things.

Posted by FinanceProfessor at 12:39 PM No comments:

The Agenda: A Closer Look at Middle Class Decline - NYTimes.com

The Agenda: A Closer Look at Middle Class Decline - NYTimes.com:

"Since median inflation-adjusted family income peaked in 2000 at $64,232, it has fallen roughly 6 percent. You won’t find another 12-year period with an income decline since the aftermath of the Depression.


Why?  Hard to say, their attempt:

"In the simplest terms, the relatively meager gains the American economy has produced in recent years have largely flowed to a small segment of the most affluent households, leaving middle-class and poor households with slow-growing living standards."

Which does more to explain what happened and not why.  My short attempt at the "Why" in simple bullet points:

Posted by FinanceProfessor at 11:25 AM No comments:

ANALYSIS: Should airlines hedge their bets on fuel?

ANALYSIS: Should airlines hedge their bets on fuel?:


From Flightglobal.com ANALYSIS: Should airlines hedge their bets on fuel?:

"When Delta Air Lines announced its intention to acquire an oil refinery earlier this year, the unusual move drew a mixed response from analysts. Some praised its innovation, arguing that its daily consumption of 210,000 barrels of jet fuel justified cutting out the middle man. Others questioned whether airlines should be in the business of refining crude oil.

But one thing no one disputed was the urgent need to offset fuel price volatility. According to IATA's latest forecast, Brent crude, the main European benchmark, is likely to average $110 a barrel this year - but in just six months spot prices have ricocheted wildly between $128 and $88."

Posted by FinanceProfessor at 3:46 PM No comments:

Sandy Weill: Break up the big banks - Jul. 25, 2012:
Reverse course?  Weill seemingly admits the repeal of Glass-Steagall was a mistake.

"The man responsible for creating Citigroup -- the world's first financial supermarket -- said Wednesday that the nation's largest banks should be broken up in order to protect taxpayers.

Former Citigroup chairman Sandy Weill -- who engineered a series of corporate takeovers and lobbying efforts to create Citigroup -- explained during an interview on CNBC why he now thinks a firewall between commercial and investment banks is needed."

Posted by FinanceProfessor at 3:38 PM No comments:

Posted by FinanceProfessor at 1:34 PM No comments:

Why Floundering Is Good | Psychology Today

Why Floundering Is Good | Psychology Today:


Yes!  I have ammunition now. :)  but My students may not like this but it fits exactly what I have said since even before I started teaching.     (thanks to Farnam Street for pointing this one out!

"...it’s better to let the neophytes wrestle with the material on their own for a while, refraining from giving them any assistance at the start. In a paper published earlier this year in the Journal of the Learning Sciences, Kapur and a co-author, Katerine Bielaczyc, applied the principle of productive failure to mathematical problem solving in three schools in Singapore."

"First, choose problems to work on that “challenge but do not frustrate.” Second, provide learners with opportunities to explain and elaborate on what they’re doing. Third, give learners the chance to compare and contrast good and bad solutions to the problems. And to those students and workers who protest this tough-love teaching style: you’ll thank me later."

Posted by FinanceProfessor at 12:38 PM No comments:

NBA Players Forced to Save Toward Retirement for First Time - Bloomberg

NBA Players Forced to Save Toward Retirement for First Time - Bloomberg:

To combat the near epidemic problems of professional athletes going broke after failing to safe for tehir retirement, the new NBA agreement includes a forced saving plan:

"Beginning next season, players also will surrender 5 percent to 10 percent of their salary for retirement. They automatically will be enrolled in the program and would have to opt-out to keep from participating in the plan, Klempner said."

Note how the plan makes use of defaults (lesson learned from behavioral finance!)

Didn't know lack of saving was a problem? Here from the article:


"Former NBA players Scottie Pippen, Latrell Sprewell and Antoine Walker are among retired professional athletes who have experienced financial difficulty after careers in which they earned tens of millions of dollars. Walker filed for bankruptcy after being paid more than $100 million over 12 years in the NBA.


“It’s a start,” player agent Keith Glass said in a telephone interview. “It does force you to save something, and that’s a good idea.”

Posted by FinanceProfessor at 11:04 AM No comments:

The endowment effect essentially says that you value something you own more than it is worth from an outside perspective.  Now it appears that chimps suffer the same bias:


"Drawing on prior theoretical work by Jones on the evolution of seemingly irrational behaviors, Brosnan and Jones found consistency between chimpanzees and humans with respect to the existence of the endowment effect and, more importantly, showed that variations in the prevalence of the effect could be predicted."

Posted by FinanceProfessor at 2:57 PM No comments:

Several of my facebook friends have posted this and, well, there are so many things wrong with this picture it barely deserves mention, but if it is not mentioned, people will only see one side of the discussion. 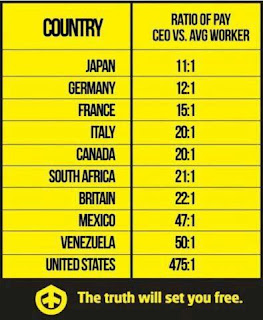 So let's see is this true?

Yes US CEOs are highly paid both historically (excluding late 1990s-early 2000s) and relative to their peers in other countries.  CEO pay has fallen somewhat since the high flying internet boom.  SO CEOs are paid a great deal (pun intended), BUT this is in part due to size differences (larger firms pay CEOs more), the contribution the CEO makes (example in Japan CEO plays a lesser role), and form of pay (more pay is form of options (which CEOs do not value as much as recorded value) the higher the pay.

Moreover, even the numbers (ratios) are questionable:


"... don’t doubt the chart’s underlying point that the ratio of CEO pay to worker pay is high in the United States, and is likely higher in our free-wheeling economy than it is in the historically more egalitarian nations of Europe.

But in its claim that the U.S. ratio is 475 to 1, the chart conveys a sense of certitude and statistical precision that simply isn't warranted -- and which is contradicted by the facts. The latest number for the U.S. is 185 to 1 in one study and 325 to 1 in another -- and those numbers were not generated by groups that might have an ideological interest in downplaying the gaps between rich and poor"

Posted by FinanceProfessor at 12:47 PM No comments: