"International companies have so much discretion in allocating costs and revenues across their dispersed units that the corporate tax base is unavoidably slippery -- all the more so when governments promote that very slipperiness in an effort to attract investment.....Why fight it? The best strategy to deal with international tax avoidance is what we have recommended: Cut corporate taxes and increase taxes on individual investment income (dividends and capital gains) instead. It’s much harder for individuals to arbitrage away their tax obligations than it is for companies operating across borders. This way, corporate profits are still taxed -- but on a simpler, less distorting basis than the typical corporate tax code provides."

Posted by FinanceProfessor at 7:52 PM No comments:

"The suit, in federal court in Manhattan, cites "highly suspicious trading" in Heinz call options just prior to the February 14 announcement of the deal. The regulator has frequently in past filed suit against unnamed individuals where it has evidence of wrongdoing, but is still trying to uncover the identities of those involved.

That trading, the suit said, caused the price of the particular call option they bought to soar 1,700 percent and generated unrealized profits of more than $1.7 million."


Interestingly, the event study using yahoo data (which I think does not look at afterhour trading) on the stock looks "clean" with two right angles: 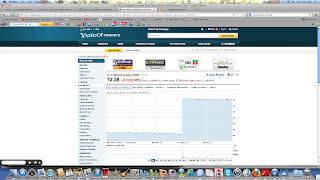 Posted by FinanceProfessor at 9:41 AM No comments:

Warren Buffett and Heinz: Why He Made the Investment | TIME.com

Warren Buffett and Heinz: Why He Made the Investment | TIME.com:

"As market watchers know, he’s considered a value investor—someone who buys companies when they’re cheap—which is a strategy he learned from his Columbia Business School professor Benjamin Graham, author of the geeky classic The Intelligent Investor. He’s also partial to the market’s plain vanilla: low-risk companies with rock-solid balance sheets. In this case, Heinz didn’t come cheap. Buffett’s Berkshire Hathaway and 3G paid a 20% premium for Heinz’s shares, which makes them pricier than those of most packaged foods companies (aside from a few elite brands like Nestle and Hershey). For Buffett, the real value of Heinz was its steady stream of cash and safe strategy."

"Concern is growing about risks to U.S.-based multinationals in a country where American audit regulators are locked out by the Chinese government and bribery and fraud are routine.....On January 18, Caterpillar disclosed "deliberate, multi-year, coordinated accounting misconduct" at the Siwei unit of ERA Mining Machinery. Caterpillar said it would write off most of the $654 million it had paid to acquire ERA only months earlier....Caterpillar has provided few details, but it has disclosed inventory discrepancies, inflated profits and improperly recorded costs and revenue at Siwei."

Posted by FinanceProfessor at 11:37 PM No comments:


"Poison pills were developed in the 1980s to enable insiders to block a hostile acquisition. Over time, however — and without sufficient attention by investors and public officials — companies have started to use poison pills to prevent acquisitions of stakes that fall substantially short of a controlling block.

Indeed, among the 637 companies with poison pills in the FactSet Systems database, 80 percent have plans with a threshold of 15 percent or less."


"...by entrenching insiders and insulating them from engagement by large outside shareholders, low-threshold poison pills could well impose costs on public investors who do not wish to sell their shares."

I was asked why this would be bad.  My answer is actually from a previous NY Times article from Lucian as well:

"...the presence of large outside shareholders, or the prospect of their emergence, provides an important source of discipline for management. Often, a company’s stock price is bolstered after S.E.C. records, known as 13D filings, disclose the emergence of a large outside shareholder. This is a reflection of investors’ belief that such a presence can be expected to benefit their fellow shareholders. The proposed 5 percent hard cap, however, would reduce the amount of stock that could be purchased before making a 13D filing. That would lower the potential returns to large outside shareholders produced by identifying an underperforming company and taking a significant stake in it."

Posted by FinanceProfessor at 9:43 AM No comments:


"Insiders are waving the cautionary flag in an increasingly aggressive manner."

There have been more than nine insider sales for every one buy over the past week among NYSE stocks, according to Vickers. The last time executives sold their company's stock this aggressively was in early 2012, just before the S&P 500 (^GSPC) went on to correct by 10 percent to its low for the year."

While much evidence suggests insiders do beat the market, it appears less likely that we can by trading on the news of their trades.  To wit:

On the profitability of their trades, here is a recent study from Spain:

"This paper ....show[s] that insiders earn excess profits when investing on corporate nonpublic information, while outsiders mimicking them fail to obtain those excess returns...."


and some from the US:


The Reaction of Investors and Stock Prices to Insider Trading

"Trading by corporate insiders and their tippees is analyzed in Anheuser-Busch's 1982 tender offer for Campbell Taggart. Court records that identify insider transactions are used to disentangle the individual insider trades from liquidity trades. Consistent with previous studies, insider trading was found to have had a significant impact on the price' of Campbell Taggart."


In the Journal of Finance Lisa Meulbroek(a real superstar) writes:


"Using previously unexplored data on illegal insider trading from the Securities and Exchange Commission, this paper finds that the stock market detects the possibility of informed trading and impounds this information into the stock price. Specifically, the abnormal return on an insider trading day averages 3%, and almost half of the pre-announcement stock price run-up observed before takeovers occurs on insider trading days. Both the amount traded by the insider and additional trade-specific characteristics lead to the market's recognition of the informed trading."

Posted by FinanceProfessor at 1:33 PM No comments:

The Honest Truth About Dishonesty by Dan Ariely

RSA and Ariely together?  YES!
Posted by FinanceProfessor at 12:32 AM No comments:

Posted by FinanceProfessor at 12:13 AM No comments:

This took longer than expected.

From September 2004 through October 2007, S.&P. “knowingly and with the intent to defraud, devised, participated in, and executed a scheme to defraud investors” in certain mortgage-related securities, according to the suit filed against the agency and its parent company, McGraw-Hill Companies. S.&P. also falsely represented that its ratings “were objective, independent, uninfluenced by any conflicts of interest,” the suit said."

From the AP (via Crains' New York Business)

The charges would mark the first enforcement action the government has taken against a major rating agency involving the financial crisis.

Posted by FinanceProfessor at 11:24 AM No comments: