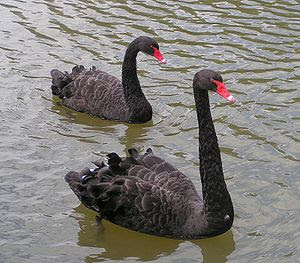 Image via WikipediaFinally.   We all love it when someone makes sense (which admittedly all too often is defined as "someone who agrees with me"), but all too often we hear the same things over and over again even if they are wrong.

For instance, reading the popular press and listening to managers talk about risk management is often an annoying exercise of them trying to convince us they know more than they really know.  (Indeed the same can be said of most newscasts, analysts (political, news, or sports) and all of ESPN but I digress).

With respect to finance, one area where this idea regularly shows up is in the area of black swans.  In the years since Taleb's Black Swan book came out, many (and some students I might add), have droned on about predicting black s

Unfortunately, while these steps are all good things to do, they can not predict black swans.  Why? The very nature of a true Black Swan is that it is unpredictable.

Taleb recently tried to correct people's thinking on  the subject.  From Forbes:

“…I’ve been trying to emphasize the true message of the black swan, which is that there are some environments in which rare events are simply not predictable.

“Most people think that they can predict the black swan, that with quantitative sophistication they can get answers. They don’t get the idea that because we can’t predict black swans, then we need to restructure institutions and rethink strategies to be more robust in the face of uncertainty.”

How?  Reduce debt and build in back up plans (even if they are more expensive) (Gee, sounds like our Corporate Finance Discussions after the Japanese Earthquake/Tsunami/Radiation event).   Again from Taleb:

Taleb's comments were from a new book entitles the Known, the Unknown, and the Unknowable in Financial Risk Management that I have yet read, but am definitely going to get (even at $60.)

Posted by FinanceProfessor at 12:17 PM

Too many companies today say they are "sales driven". That usually means that the CEOs, etc, are all paid bonuses based strictly on sales data. I think many would be surprised at how much risk businesses are willing to take-on, just so the executives can "hit the numbers" and get their year-end bonuses.